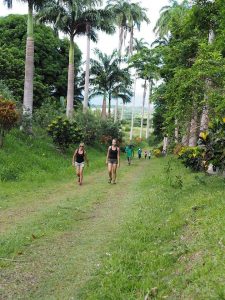 It’s  the weekend before Carnival in Grenada, parties going on all over the place and what do we do? Well, we’re hashers, so we do what we normally do – run around in the bush and drink beer afterwards, of course! And what a run, walk, whatever this was – “Crisis” & Co. really set out some nice trails for us. I ended up doing the Walker’s trail and I think it might have been the better of the choices as we got treated to pretty nice river section, as my pictures clearly show. The venue chosen for the hash did prove to be bit challenging (parking and no mike!), but we made it work. Food and drink was on point as well. 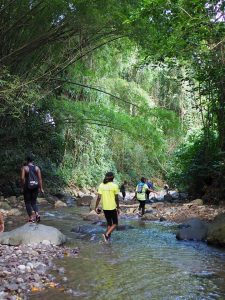 Of course as the hash was in Dunfermline, a bunch of us ended up at one of our usual after-hash haunts, the “Bumpy Corner” bar, after spending about half an hour stuck in the traffic in Grenville, grr. I knew I should’ve taken the Grand Bras bypass…
Next week, assuming that a certain two political leaders currently embroiled in a dick-waving competition don’t lead the world into global thermonuclear war, we’re in Perdmontemps, courtesy Cyprian.