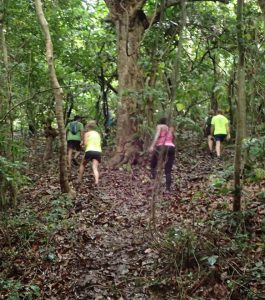 The overcast, rainy and thunderstormy weather kept a few hashers home, but for those that braved the elements and drove up to St Patricks – we were all pleasantly surprised with no rain. “Crisis” set two wonderful trails which although had some fun slippery muddy sections – they were safe, fun and runnable for the most part.

“AC/DC” stood in as hashmaster while “Grab De Pussy” was away and he managed to get through both all the speeches and ceremonies without swearing at anyone! 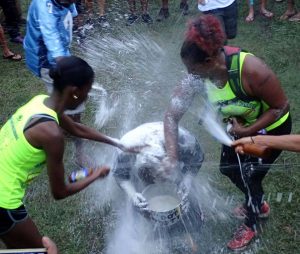 After the virgins had had their ceremony and received their de-virginsation certificates,, Adrianna was given a hash farewell and Kelly “Rear Entry” Henry was brought forward to be wished Happy Birthday. When we realised that “Rear Entry” had the sneaky foresight to shave his head just in case he was given a hash birthday cake – well we could not disappoint him. “Rear Entry” was wished happy birthday in true hash style with beer, flour, eggs, whipped cream and a candle!

Good music, drinks, food and a break in the rain ensured a good after hash lime. Thank-you “Crisis” for a wonderful hash.