It’s  been almost smooth sailing so far, and all of a sudden – disaster! Turns out that the next hash which was scheduled to start in Upper Corinth was actually going to be in Laura. Not only have we hashed in Laura several times, but the next hash after that was going to be only a mile or so away, and two hashes after that we’d be back in Laura again. So, I had to make a decision that was in the best interest of the hashers – another location had to be found for this week’s hash. So a few phone calls and WhatsApp messages later and the hash was moved to Bay Cottage Bar, just outside of Gouyave, courtesy “Bling Ting” and friends. And what a hash it was – great Runners’ trail (which I did) and the Walkers’ trail got good feedback as well. And of course, being a beach bar, it also turned out to be a perfect place to both start and end a hash. Good work “Bling Ting” on such short notice! Maybe we should do this more often… 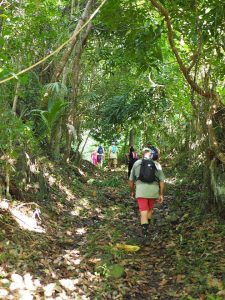 Highlights from this hash…
1. Walking by this pretty steep drop-off down to the river, I remarked “I hope no-one falls down there”, and then I looked over and saw some flattened bush, and said, “Hmm, it looks like someone did”. Sheldon Keens-Douglas, who was just a bit in front of me, shouted “He did!” and pointed out someone in front of him. And yes, the guy did look like he barrel-rolled a few times down the side of the hill, with bits of brush and mud all over the place. And not a scratch! Ok, one small one, but still… I told him to go buy a lottery ticket quickly before his luck ran out. BTW, I’ve already consulted my Naming Committee, and one has already been selected, so when I see you again…!
2. Catching “Foot Fetish” walking off with a bunch of stones in her hands. Oh “Foot Fetish”, if you didn’t have a name already, there definitely would have been one coming.
3. The Devirginization Ceremony seemed to be short a few virgins, one in particular. Oh well, I’ll catch you at the next hash – I don’t forget faces, muhahaha….