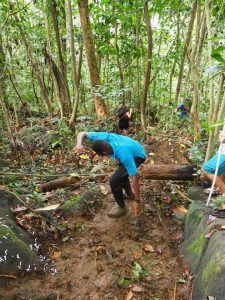 Great confusion began when the runners came across some walkers heading in the opposite direction to them on the trail. Unbeknownst to the runners that was the short walkers trail which had diverted off the regular walkers trails.

Oops – we might have told a few of them they were going in the wrong direction! The runners then met up with the walkers on a steep and slippery uphill and even steeper downhill, which made passing interesting – but at least we weer all going in the same direction.

The trails were all good and the hares did receive a down down for sending the short walkers in the opposite direction and confusing the poor hashers.

Thanks hares – as usual fun was had by all!