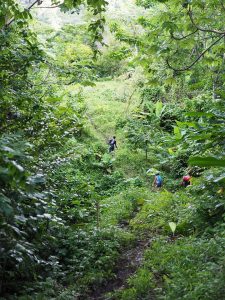 Hashmaster’s Report: Hash #990
Attendance: 147
I  believe that this was a Virgin Hare Hash, so I had a just a slight bit of concern when “Grandad” decided to have a look at the trail during the week and e-mailed me a note saying that they were going to convert it from a simple Runners and Walkers trail to Long Runners, Short Runners, Long Walkers and Short Walkers. My concerns turned out to be unfounded though as, based on the feedback from the other hashers, the trails were excellent. I did manage to almost pass out on the Short Runners’ Trail a few times, but I put that down to the medication I’m currently on rather than the trail itself. And of course there was a lot of mud too, though not quite on Grand-Etang level. 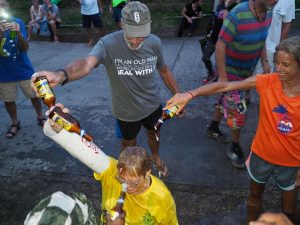 Highlights from this hash…
1. A working mike that unfortunately worked up to two feet away from where I wanted to stand to hold the ceremony, so it was back to shouting again. Only nineteen virgins this time around though, so no worries.
2. Rohan wasn’t around to give an outline of the trails, so it was left up to “Cheap Fares” and “Grandad”, his Assistant Hares (a.k.a. Ass. Hares) to do the necessary. Rohan’s Ass. Hares did a pretty good job of standing in for him – just goes to show that it’s always a good thing to get a few Ass. Hares involved when setting a hash…
3. Oh, so many doing the wrong thing concerning the Devirginization ceremony! One couple who missed the ceremony at the last hash, two ladies with shower-caps on who were obviously informed beforehand of what was going to happen (“Stayfree” was fingered as the likely culprit, but he denied it vigorously), and two more that joined the ceremony late. They were all “down-downed” accordingly for their transgressions.
4. “Mucky Draws” was away for awhile so we couldn’t celebrate her birthday in usual hasher-fashion. Not a problem – we just celebrated in the usual hasher-fashion today. Happy 70th, “Mucky Draws!”