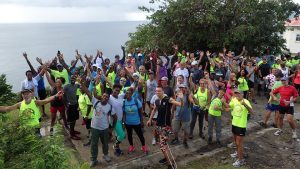 Hash #999 Carriacou hash was held on Saturday 23rd September 2017. The hares for the day and weekend were Gary “SS Useless” and John Adams “Stay Fresh” and they were assisted by the rest of the “Bling Ting Crew”

Hashers started arriving in Carriacou from Thursday morning onwards with the majority arriving on Friday. A great evening lime in Hillsborough on Friday evening got everyone in a party hash mood for the weekend. The Saturday hash (#999) started on the windward side of the island and all hashers either took the semi-iron man run or walk trail back to town. The runners (semi iron-man) trail was fantastic, lots of bush with very steep uphills and downs. 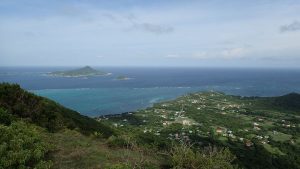 With everyone expecting a hot dry hash which is the norm for Carriacou – we were all surprised by rain and overcast weather. This made for some fun mud going up and down the steep hills. The after hash lime was at the beach bar next to the ferry and the celebrations were interrupted by one or two downpours of rain. Hashers being the toughies that they are just carried on partying and dancing.

Two hash names were awarded, the first to Justin from Digicel for neglecting/losing his son on the trail – so he will now be known as “Feckless Father“. Naomi showed us some rather interesting dance moves on Friday night with lots of sideways kicks that earned her the hash name of “Jackie Chan“. 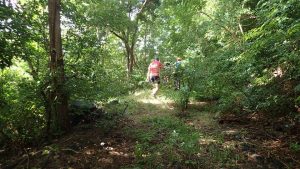 Just to keep the party going “Grandad“, “Doggy Style” and “Saber Tooth” put on a live hash on Sunday morning, which had a fair attendance considering the wild parties the night before. Sunday afternoon, most hashers rushed back to Grenada to get ready for the 1 week of celebrations for our 1000th hash.