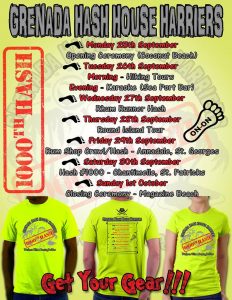 Hash #1000 was celebrated with one week full of hashing events. The celebration week started on Monday 25th September 2017 and finished on Sunday 1st October 2017 with the main event 1000th hash being on 30th September.

This has been a week that will go down in our hashing history, our 1 week celebration had all the Grenadian hashers (new and old), lots of overseas hashers and many, many virgin hashers!

The week started on Monday 25th with an Opening ceremony at Coconut Beach in Grand Anse. Quite an interesting and highly entertaining performance was put on by “Cereal Killer” and “Cradle Snatcher” who were assisted by the backup dancers “Rear Entry”, “Cheap Fares” and “Survivor MSN”. Our hashmaster “Grab de Pussy” gave a welcome speech and “Dead” was the MC for the evening. A wonderful party was had by all and it was a good start to an exciting week. 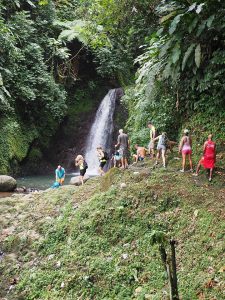 Tuesday 26th started with a couple of hikes in the morning. Buses picked up hashers and dropped 33 people off for the challenging hike from Concord Falls to Grand Etang. The other buses dropped 44 hashers off to enjoy an easier hike from Grand Etang to the Seven sisters waterfalls and back, which include a swim.  Food, drinks and a rinse of muddy feet and legs at the Grand Etang visitors center after the hike befor heading back to town.

Tuesday evening was Karaoke at SeaPort and some good and not so good singing was heard and many prizes given out. 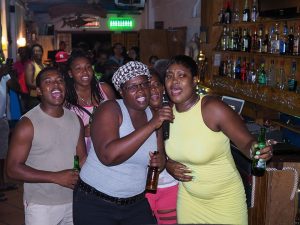 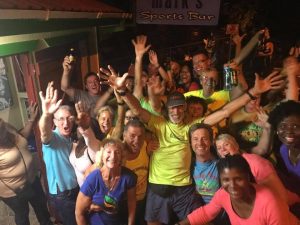 Thursday 28th was a Round The Island Tour which included the Nutmeg Factory, Diamond Chocolate factory, lunch in Sauteurs, River Antoine Rum Distillery, then Bumpy Corner bar and finishing up at Banana’s in True Blue. A scavenger hunt competition between the two buses made for some extra fun and “Doggy Style’s” bus won by the skin of their teeth because “Saber Tooths” bus had one person (Higgins – you will not be named) that went for food instead of competing.

Friday 29th was a Rum Shop Crawl hash and this was held in Annandale, there was rain about an hour before the hash – so the trail was extra muddy and slippery – just the way the hashers like it! The trail stopped off at 4 rum shops and there was a raffle prize giving at the end. 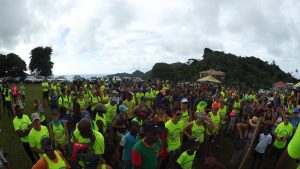 Saturday 30th was the main event Hash #1000 which was held in Chantimelle in St Patricks. There was a huge turnout to support our 1000th hash with over 400 hashers. The hash itself offered something for everyone with a choice of 8 trails, the rain made for some very interesting muddy bottoms and challenging running and walking. More info on our 1000th hash here. 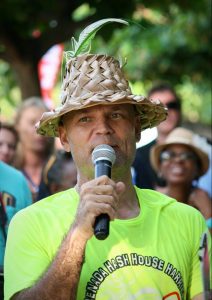 The grand finale to the week was the Closing ceremony on Sunday 1st October held at Magazine Beach. There was fantastic food, a DJ, a bar and of course the prize giving.

The grand prize 6 night sailing trip on Island Windjammer was won by a very excited Rhonda and many other prizes were awarded and won in the raffle. Special thanks to our super Hash Master Brian “Grab De Pussy” Steele for heading up this spectacular 1 week event, everyone had an unforgettable time.