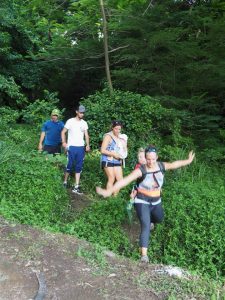 Meet the Grenada Hash House Harriers, the local chapter (known as kennel) of the world-wide organisation known as the Hash House Harriers.The Hash meets every Saturday afternoons, in a different part of the island. It is composed typically of between 50 to 370 runners and walkers of all ages, shapes and sizes. There are mothers with children, locals and visitors; our most senior hasher (“Spring Chick”) is 84.

The answer to the question “Are These People Mad” is Yes and No.  As hashers will tell you : if you have half a mind to hash, that’s all you need.

What are we doing (hashing) What is hashing?

Every other Saturday, at precisely 1600 hours in summer and 1530 hours in winter, a motley group of assorted runners and walkers assemble at a previously designated rum shop, sports field or pasture, somewhere in Grenada. 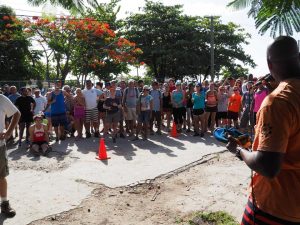 After an initial briefing by their leader (known as The Hash Master or Hash Mistress) they set off in the bush, shouting ON ON.

They follow a trail of flour or shredded paper which takes the “pack” through some of the most attractive parts of the island and they return to the start location a couple of hours later to consume large quantities of beer and undo all the good that this running and walking has done to them. Are these people mad? The “Grand Inquisitor” of the Grenada Hash House Harriers, long time resident of Grenada John Albanie, endeavors to explain. 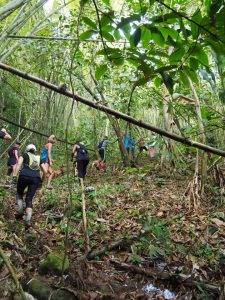 Competitiveness is frowned upon in a hash. FRB’s (Front Running B?..s) are looked down on. Hashers who cut corners,SCB’s (Short Cutting B?..s), are regarded with equal disdain.

You run or walk at your own pace, at your own risk, and with the knowledge of your own limitations. If you are unhappy about the trail ahead of you, you turn back and follow the trail back to the rum shop.

No embarrassment is caused by cutting short your hash for any reason – it just means that you get to the beer ahead of the rest of the pack. 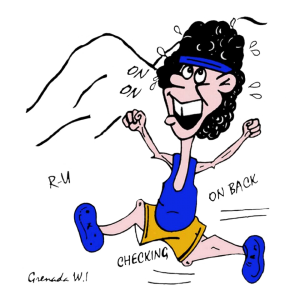 Are You ? – Question yelled by Hashers to determine if you are on trail. You respond with “Checking”, “On-On”, “On-Back”, “Looking” or “Lost”.

Checking – A Hasher who has reached a check point and is looking for the correct trail. A response to “Are You?” assuming that is what you are doing.

Check Point – A circle indicating more than one possible trail. Only one will be correct.

False Trail – A mark usually an X , that tells the pack the trail is false and to back check on the trail they’ve been running.

Hare: hasher who lays the trail

Hare’s Arrow – An arrow which indicates that you are definitely on trail.

Hash Cash – The Hash embezzler, responsible for skimming money from the Hashers who turn up. Treasurer of the Hash.

Hash Name – Your parents had no ideal what they were doing when they named you. The Hash will fix that. A Hash Name is a fond nickname bestowed upon a Hasher after a certain number of runs, on special occasions or when the Hasher has done something so absurdly stupid that the Hash couldn’t wait to name them. It is considered bad form to call a Hasher by another name whilst at the Hash. Of course if your parents gave you a really embarrassing name like Archibold or Cuthbert you might keep that as your hash name. * Note : Don’t be too eager to get a Hash Name.

On On – Shouted to encourage other hashers by indicating that you are on a true trail. The usual response to “Are You?”

Virgin -You, if you’re reading this. A first time Hasher.